Walter Buckel, TPA president in 1985-86 and a 2008 inductee into the Texas Newspaper Hall of Fame, passed away this morning, five days after celebrating his 92nd birthday. He was a wonderful, caring man who loved his God, his family, his community and the entire Texas newspaper family.

Please keep his family in your prayers. As most of you know, his son, Bob, served as TPA president in 2003 and is now with the Wise County Messenger in Decatur.

Below is Walter’s obituary: 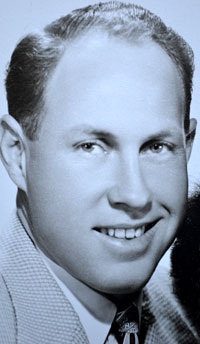 Funeral for Walter Buckel, 92, former Lamesa newspaper publisher, will be Monday, Dec. 2, 2013 at 2 p.m. at the Lamesa Church of Christ with Mark Hackett officiating. Interment will follow in Lamesa Memorial Park under the direction of Branon Funeral Home. Visitation will be Sunday, Dec. 1, from 3- p.m. at Branon Funeral Home. Buckel passed away Wednesday morning, Nov. 27, at his home in Lubbock.

He was born Nov. 22, 1921 in the Imperial Valley of Southern California, the son of Fred and Irene (Huth) Buckel.

Leaving school during his senior year at Holtville, California, he began playing minor league baseball in California, Kansas and Nebraska. He came to Lamesa in 1941 and signed a contract to play for the Lamesa Lobos of the West Texas/New Mexico League.

Buckel served as a radio operator with the U.S. Army Air Corps in North Africa during World War II.

After the war he resumed playing baseball and married Rubye Neile Mitchell March 3, 1947 in Montgomery, Ala. They decided to make Lamesa their permanent home after he returned to play baseball here in 1947.

He served as business manager of the Lamesa Baseball Club and then as cafeteria and transportation director for the Lamesa Independent School District. He was elected Dawson County Clerk and served four and one half years before resigning in 1957 to enter the insurance business.

In 1960 he was named manager of KPET radio station and held that position until 1967, when he purchased the Dawson County Free Press, a weekly newspaper in Lamesa. The following year he joined with James Roberts of Andrews to purchase the Lamesa Reporter and merged the two publications to form the Lamesa Press-Reporter. He served as publisher of the Press-Reporter until 1991 and as president of the newspaper and of his sister company, South Plains Printing, until 1993. He remained on the boards of the two companies until earlier this year and held the title of publisher emeritus.

He helped raise well over a million dollars for local causes by heading fundraising efforts for the Lamesa campus of Howard College, creation of the Dal Paso Museum, establishment of the state prison here, and relocation of the Senior Citizens Center.

Buckel was a longtime member of the Lamesa Church of Christ, where he served as an elder for 26 years.

A scholarship established in 1999 in honor of Walter and Rubye Buckel is awarded annually to a graduating senior from Lamesa High School.

The Buckels moved to Lubbock in 2010.